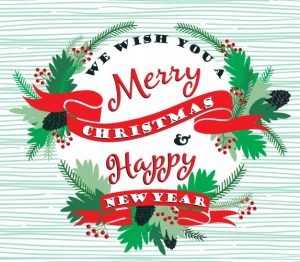 This is the last Weekly Overview for 2018 so Merry Christmas to all readers and I hope everyone gets a good break at some stage over the next couple of months and enjoys the coming
year. For businesses the year has finished on a positive note with the monthly ANZ Business Outlook survey showing near across the board improvements in the various measures we look
at. Confidence about the economy over the year ahead has improved to a net 24% negative from 37% in November. This is the best result since April and perhaps what one would expect to see
under a Labour as opposed to National government. As noted previously there is a structural shift in this measure of about 40 points downward when Labour are in power and it sat at
+18% just ahead of last year’s general election. 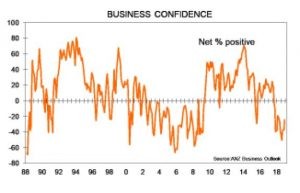 Business employment expectations have lifted to +7% from a low of -6% in August. This is still below the ten year average of 13% and not a true reflection of the desire of businesses to hire people which we see. But it is still a good outcome. Investment intentions have also moved back into positive territory at +5% from a low of – 9% in September and average of +14%. 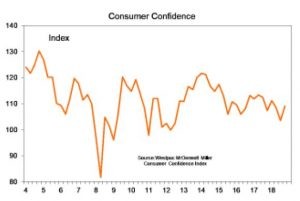 These readings help back up the strong view we have been expressing here that the measures of business sentiment have not been accurately reflecting what is really happening in our economy. Sure, there are lots of reasons why someone can take a negative view – but they are almost entirely offshore. And we have repeatedly highlighted in recent years that anyone who has got down in the dumps in NZ and restricted their hiring and investing post-GFC because of world worries will have missed out on huge opportunities and gains. We think the same applies now.

Looking ahead for NZ we have support for growth from a wide range of sources including good stimulatory fiscal policy with a virtual guarantee that more is to come, underlying trend growth in healthcare and aged care, good prices for most of our primary exports, growth and investment in tourism, growth in the digital sector, still strong net immigration, low interest rates virtually set in concrete to remain low for years to come, a comfortable exchange rate except against the Aussie dollar, and falling oil prices.

Consumer confidence has also just improved along with business sentiment. The Westpac McDermott Miller quarterly reading has risen to 109 from 104 last quarter. 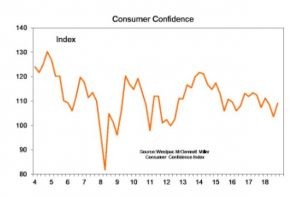 For the record, this morning we received some old data – the quarterly gross domestic product calculations – showing that over the three months from July through September our economy grew by 0.3% after growing 1.0% during the June quarter. The full year growth rate came in at 3.0% from 3.1% three months ago and 3.2% a year back. Growth over the past four years adds up to about 14.6%. The latest quarterly rise was less than market expectations but upward revisions to previous numbers means strains on the economy’s capacity from growth are actually more than thought.

I could write more in this section but who outside retailers can be bothered putting in huge effort at this time of year?      Enjoy the break.

Nothing new to write this final week of 2018. Suffice to say Auckland remains flat and over 2019 the regions are likely to slow. But supply problems exist in our major cities and these along with low borrowing costs, strong employment growth, above average net immigration, easing credit controls, and rising construction costs, will keep an upward bias to house price increases.

And it pays to remember that much as the traditional economic cycle seems to have ceased to exist because of the absence of surging inflation, it seems reasonable still to think in terms of a housing cycle. But it does not pay to get too bogged down with a particular periodicity. It could be seven years, it could be ten years. Either way, it is holding for the long-term which gives the best gains to housing investments. It is the short-term opportunists who will be hurt most by the government’s policy changes.

What might be the next thing to pay attention to in our broadly defined NZ housing market? Not an interest rate shock. Not a migration shock, partly because the numbers are becoming far less open to analysis with removal of departure cards. Not an economic shock given the factors supporting growth. Ditto for employment. Not a credit supply shock because come January we enter our second year of credit control easing from the Reserve Bank. Certainly not a supply shock given the shortages of builders. Oh, and as the government moves to give priority to migrants shifting to the regions, guess what that means for builder availability in Auckland!

My pick is twofold. Slowing regional housing markets in simple lagged response to Auckland’s slowing. KiwiBuild commentary to and from the government slowly shifting toward redirecting construction toward social housing and away from “affordable” housing. That will necessitate a change in how to pay for such housing given that the properties won’t be onsold to the private sector (hence the support for this strategy which will come from the left wing). Opportunities for investors might open up in that regard. Because the eventual move away from affordable housing will be viewed as detrimental to middle class aspiring young people the capital gains tax proposal to come from the Tax Working Group is not likely to be taken into the next election by this government.

Your Strategy    -Things to consider in your next annual strategy session. 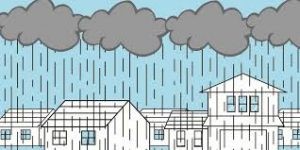 Just briefly, where we live north of Wellington rain events seem to involve greater volumes falling over short periods of time than was the case when we moved in quarter of a century back. The water runoff along the road we live on when these rains come has gauged out big holes on the uphill side of the road. Filling with loose gravel was a waste of time. Filling with rocks of 20-30 cm diameter earlier this week has proved even worse. They have simply caused localised high water pressure zones which have spewed the loose gravel onto the road and produced new holes like never before. Porirua City Council – you need to get a proper engineer to look at our Judgeford road. 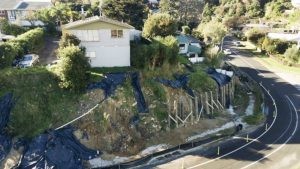 The point is, NZ has an extensive and expensive roading network and being “irredeemably pluvial” as former Prime Minister Geoffrey Palmer said some years back, our roads are frequently tested by rain. Those tests are intensifying. Costs of maintaining NZ roads are going to go up – especially as contractors seem to be making a hash of some major projects such as road surfacing on the Kapiti Expressway. Where on earth did the competent builders of things go in New Zealand? Back to the UK in the late-1970s? 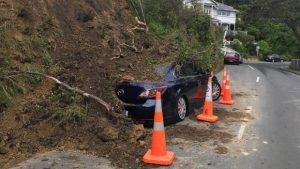 Businesses should be aware that over time costs related to transporting goods around the country are going to go up along with delays from road closures as repairs are undertaken. Much as people in the regions may pray at night for largesse to fall upon them from Mr Jones’ Provincial Growth Fund, there is only so much this bribe to NZ First will be able to do with regard to regional transport networks. Central government funds are going to have to concentrate on the main roads, especially given the deepening focus by the Associate Transport Minister on radically reducing our appalling road toll. 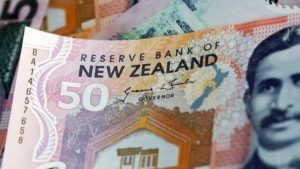 As regional/rural road maintenance costs rise, be prepared for outright downgrading of some routes and increasing concentration on selected main roads. Council rates being levied on an aging population unable to recoup higher rates through higher wages will force deepening council spending rationalisation

The news is good for people on low incomes but of course many businesses will struggle. Some will have to close down because they will not be able to afford the higher wages and will struggle to raise selling prices to recoup the higher costs. If we have high unemployment in this country then this would be very problematic. But the labour market is exceptionally tight and there are jobs aplenty. For our standard of living to rise we need to see a shuffling of the valuable labour resource from low profit areas to higher profit ones. Higher wages, the price of labour, are the mechanism through which these growth boosting changes occur in a capitalistic economy.

The hike in the minimum wage will cause business failures – and that is to be expected and the end result will be higher average productivity, incomes, and standard of living in NZ. The transition however will be difficult for some businesspeople

For some years now I have adopted a downside risk profile to forecasts of interest rates going up – thank goodness. For years the various forecasts made of tightening monetary policy have been pushed out and pushed out, usually by six months every six months. The chances of our central bank raising the official cash rate anytime soon just keep getting lower and lower. Downward pressure currently is coming from the slowing pace of world growth, falling oil prices (though these sort of changes get “looked through”, weak wages growth, and now a fresh decline in business pricing plans.

The ANZ Business Outlook survey has revealed a sharp decline in the net percent of businesses planning to raise their selling prices over the next 12 months to just 24% from 28% in November, and 32% in October. The ten year average is 23%. Year ahead inflation expectations have fallen to 2.15% from 2.29% last month. 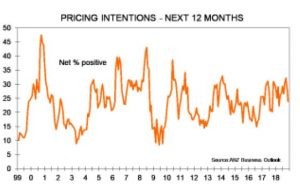 Note that monetary policy tightening expectations in the United States have changed so much in recent weeks that the ten year government bond yield has now fallen back to its August level of 2.82% from a peak of 3.2% early in November. The Federal Reserve this morning met market expectations by raising the target range for their funds rate by 0.25% to 2.0% – 2.25%. But they have pared back their growth forecasts and softened language regarding future potential rate rises – of which there might not be any if growth does come off as some fear.

Borrowers can look forward to many more years of low interest rates. For investors the need to seek out other assets in order to generate some yield will continue as fiercely as ever.

If I were a borrower at the moment I would probably still be looking favourably at the two year term. I’d stretch to three years if competition between lenders for home loans shifted out to that term. But we have not seen competition beyond two year fixed rates for quite a long time 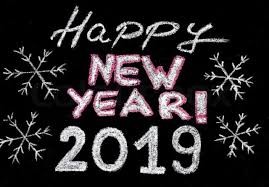