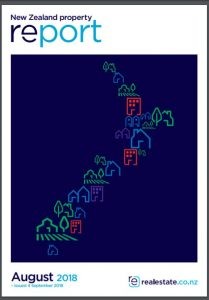 August 2018 has been a month of record highs and
record lows since realestate.co.nz started collecting
data more than 11 years ago, says realestate.co.nz
spokesperson Vanessa Taylor.

Real-time statistics from realestate.co.nz show nearly
two thirds (11) of the country’s 19 regions hit record
high average asking prices in August, while half of
the regions (9) registered all-time lows in the
number of houses listed for sale.

“Added into the mix is a healthy number of unique
browsers in August to realestate.co.nz, which hints at
an early spring lift in housing activity,” says Vanessa.
In August, more than 911,012 unique browsers visited
the site, which is a 5.2% increase on July and
consistent with summertime browsing levels, she says.

“We’ve had a relatively
static housing market since
the election period and this
lift in interest coincides
with a healthy injection of
new listings in two of the
country’s largest regions.

Of the 8,739 new property
listings across the country during August, almost
half (4,343) were located in either the Auckland or
Canterbury regions.

The increase in property asking prices was led by the
Central Otago/Lakes District which tipped over the
one-million-dollar milestone, with the average asking
price sitting at $1,019,094.*

“This is the first region to ever reach the one-milliondollar
asking price milestone in the 11 years of data
collection history on realestate.co.nz,” says Vanessa.
“Whether Central Otago-Lakes continues to outstrip
Auckland as the most expensive region in terms of
asking prices remains to be seen,” says Vanessa.

“It’s a smaller market and if there are a significant
number of top-end properties coming onto the
market at the same time, it can impact the average
asking prices.

“Auckland is larger, with a more diverse range of
properties, so it’s not always comparing apples with
apples,” she says.

While Central Otago-Lakes led the charge with a
significant lift in asking prices, there were 10 other
regions which recorded record highs in asking prices
last month. These regions registered more modest
gains and were equally balanced across the North
and South Islands.

A fall in housing stock levels nationally has led to a
tightening of options. This particularly impacts home
buyers in nine regions, all of which registered all-time
lows in the number of homes available for sale since
2007 when realestate.co.nz started collecting data.
Nationally, total stock levels in August stood at
21,207 which is down 1.6% on August 2017.

“While this seems on the face of it a modest decline,
for the regions with all-time stock lows there’s not a
lot of options and homes are being snapped up,”
says Vanessa.